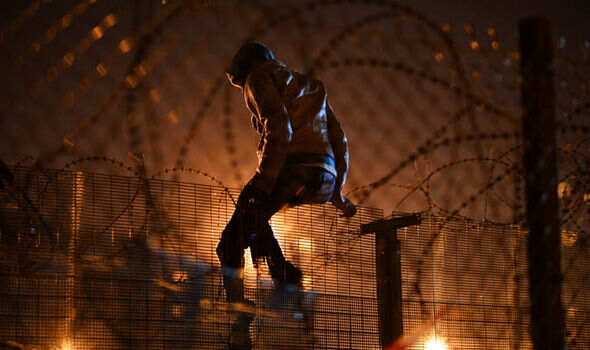 Secret plot to kick out migrants: More than 400,000 failed asylum seekers will be deported. The Tory Home Secretary has signaled her support for a Brussels initiative to return the migrants who have surged into mainland EU countries in recent months back to Africa.

She is understood to believe the move will help Britain by raising the possibility of migrant camps at Calais being cleared.

Mrs May is due to discuss the plan with other EU interior ministers at a meeting in Brussels today.

And it comes as David Cameron holds fresh talks with German Chancellor Angela Merkel today to discuss his plans for a new EU deal for Britain.

It cannot be seriously expected that Turkey would accept the return of hundreds of thousands of refugees
Tony Bunyan, director of Statewatch

The secret EU plan was disclosed by the leak of a diplomatic document today.

“Increased return rates should act as a deterrent to irregular migration,” the document said.

Proposals in the document include detaining thousands of failed asylum seekers to stop them from absconding to avoid deportation.

Brussels will also threaten to withdraw aid, trade deals and visa arrangements from African countries refusing to take back economic migrants under the plan.

A special unit of the EU border agency Frontex is to be set up to oversee the deportations, according to the document.

It added: “While member states are primarily responsible for carrying out returns, the immediate creation of a dedicated return office within Frontex should enable it to scale-up its support to facilitate, organise and fund return operations.”

EU member nations that fail to enforce internationally agreed refugee rules by deporting “irregular migrants” would face legal action and fines from the European Commission, according to the document.

More than 400,000 asylum seekers who have entered the EU are expected to have their claims for refugee status rejected.

Some from Syria, Afghanistan and Libya are likely to be among those being deported if their asylum applications fail.

But Mrs May believes that deporting failed asylum seekers from mainland Europe will also ease pressure on Britain’s borders.

In her speech to the Tory conference in Manchester earlier this week, she announced plans for deporting thousands more failed asylum seekers from the UK and cutting overall net migration.

That includes the use of alternative identity documents, known as “laissez passer”, to remove failed asylum seekers who claim to no longer have a passport.

The plan warns EU member nations that up to 60% of failed asylum seekers abscond before they are due to be deported.

“All measures must be taken to ensure irregular migrants’ effective return, including deportation,” the document said.

“All tools shall be mobilised to increase co-operation on return and re-admission,” added the document.

The leaked document was obtained by Statewatch, a civil liberties watchdog.

Tony Bunyan, director of Statewatch, said that the plan would not work and attacked the use of “EU laissez-passer to return refugees to third countries as reminiscent of the apartheid pass laws.

“Refugees, who have fled from war, persecution and poverty, do not want to return to the country they have come from. The returns policy proposed is not going to work.

“It cannot be seriously expected that Turkey would accept the return of hundreds of thousands of refugees.”

The EU’s new plan marks a step-change in its attitude towards the refugee crisis engulfing the Continent and comes after reports that Germany – which threw open its doors in the summer – faces an influx of up to 1.5 million migrants this year.

And there is mounting frustration within the EU at Turkish President Recep Tayyip Erdogan’s refusal to seal his country’s coasts and border with Greece.

Police have stopped just one in seven of the 350,000 people who have crossed since January on a major transit route for those fleeing Syria for the EU, and European leaders are convinced he could easily do more.

And on Tuesday, EU President Donald Tusk, speaking in the European Parliament, ridiculed Angela Merkel over her decision to allow Syrians to claim asylum in Germany regardless of whether they had crossed through other safe EU countries first.

He said “Wilkommen politik” had acted as a “magnet” for “millions” of Afghans and Pakistanis, and said Mrs Merkel needed to come up with serious solutions.

It was a “beautiful moral gesture” but Mrs Merkel now faces an “exam in responsibility for the protection of the European political community and its external borders,” he said.

Mr Tusk warned that the Schengen system of passport-free travel will collapse and Europe become a “breeding ground of fear” unless Europe’s external borders are secure.

Unless leaders provide “order and security”, than votes will swing behind “ruthless and radical” fringe parties. “The queue of political machos is quite long,” he said.

How many seats will One Nation win in the QLD elections.