This Isn’t Even Funny

Penny Wong should be our next Prime Minister 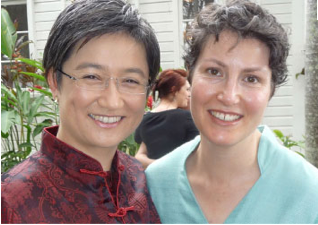 Politics the world over is being roiled by seething discontent about inequality, unfairness and the apparent and unseemly readiness of lawmakers to subjugate public interest to party, personal and vested interests. But it would be unreasonable to decry the political class en masse, or to lose all faith in the political process.

Elections are decided by undecided voters – the 2 per cent or so who are swinging voters.

There are lots of admirable people in our parliaments. This is about three of them: people who exhibit altruism, integrity and authenticity, who embrace evidence-based policy rather than ideology, and who have convictions and the courage to battle for them respectfully.

Senate Opposition Leader Penny Wong is what we should seek in a lawmaker – experienced, principled, collaborative. She is steely but not uncompromising. A lesbian who accepted but did not agree with her party’s previous opposition to marriage equality, she fought internally to change the policy and emerged as one of the most respected, respectful and convincing advocates for ending that injustice. She fought beautifully for her family – her partner and their two daughters – and for so many other families that had been vilified by those who discriminate against the two million Australians who are not heterosexual.

Penny Wong is one of the best leaders in contemporary Australian history. It is a shame she is not in the lower house, as she, above all others in our Federal Parliament, would make the best prime minister.

While Penny Wong was striving to turn her party around on marriage equality, Queensland Liberal backbencher Warren Entsch was doing the same thing within the Coalition. For years, this former welder, farmer, company director and real estate agent worked diligently to convince his colleagues that the only thing that would happen when Australia joined the rest of the industrialised world in passing marriage equality was that people in love would marry. He has helped many people realise that conflating same-sex marriage with parents’ rights and freedom of speech and religion is nonsense.

Fiona Patten, a member of the Victorian upper house, is founder and leader of the Reason Party, formerly the Australian Sex Party. She has been a calm, courteous advocate for a range of policies based on evidence, and is a champion of individual rights. She has raised community awareness about a number of fundamental issues.

She was instrumental in two recent groundbreaking changes – the trial of a safe injecting space for adult heroin users, and meticulous legislation to permit physician-assisted dying under strictly regulated circumstances. Her policy platform draws on evidence and is sensible and decent. It is designed, above all, to protect individual freedom and human rights.

Voters are rightly royally pissed off with the status quo. In Penny Wong and Warren Entsch they can, though, find some succour that the mainstream parties are not totally bereft. And in Fiona Patten, they can support a lawmaker motivated by public interest above party power.

Michael Short is The Age’s chief editorial writer and a columnist.

Normally Novamagic allows a full democracy poll where you can add your own answers. This time it is treated like a referendum, one answer only, no maybes, what if's or anything else, yes or no.